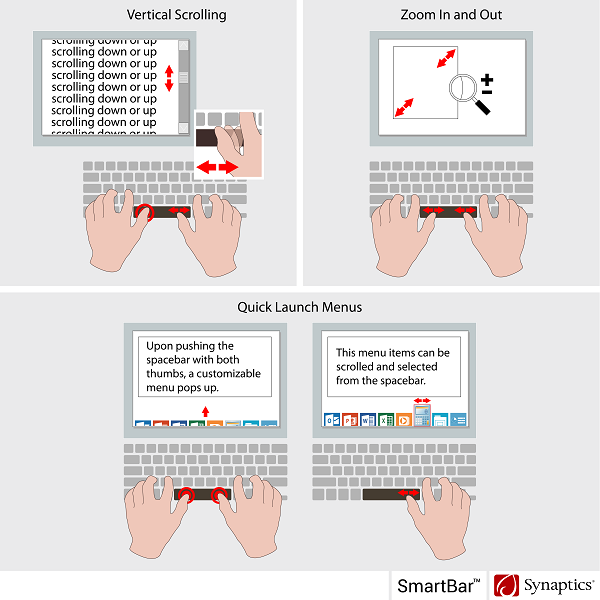 Synaptics Wants To Upgrade Your Spacebar With A SmartBar : Why It’s A Good Idea

Synaptics, the company responsible for some of the leading touch-based technologies of today’s devices, is about to provide the spacebar of keyboards with a significant upgrade.

The company is looking to add gesture controls to the spacebar, which is the most commonly used key on the keyboard.

The move can possibly lead to the elimination of the need for a mouse while operating a computer, which would be a great leap forward for what Synaptics calls as the “underutilized spacebar.”

Laptop companies have been including the TouchPad, an innovation by Synaptics, as a replacement for the mouse to keep in pace with the portability of the notebooks. However, Synaptics is looking to expand the touch interface to bring it closer to the user’s thumbs by including it in the traditional spacebar of the keyboard.

Named the SmartBar, Synaptics claims that it will be the first technology that will be released in the market which will allow users to utilize the spacebar for the added function of touch controls.

Several gestures are supported by the SmartBar to increase the typing speed and navigation of users on their computers. For example, users can do a swipe using one thumb to select a whole word to quickly edit the text, or a pinch using two thumbs to quickly either zoom in or zoom out of an image or document.

Synaptics will also offer up to five programmable logical buttons. They will not be physical buttons, but rather shortcuts that can be configured with the SmartBar for shortcuts to either perform repetitive command inputs or to execute macros that can be used while playing video games.

The video game market is one of the obvious targets for the SmartBar, with Synaptics making the early move by taking up a partnership with Tt eSports to become an early adopter of the technology. Tt eSports is the division that focuses on PC video gaming accessories of ThermalTake, a PC component firm.

SmartBar is also now available to OEMs, or original equipment manufacturers, to be used in their products. Synaptics has manufacturing connections in place with a long list of leading computer brands, including Sony, Samsung, LG and Logitech, which means that these companies could be releasing computers utilizing the technology soon.

“Integrating our touch and biometrics technology into the desktop market is a natural extension of our solutions, and just the next step in our mission to further advance the human interface revolution,” said Synaptics Human Interface Systems Division senior VP and general manager Huibert Verhoeven.